Pocket hanky for your EDC.

Pattern based on the pennant of the 22nd Artillery Support Company of the 2nd Polish Corps.

Wojtek (Voytek) was a Syrian brown bear whose mother had been shot by hunters. Soldiers from Polish 2nd Corp, who had been evacuated in1942 from the Soviet Union, bought him in Iran. He was enlisted officially as a soldier of the 22nd Artillery Supply Company with the rank of private. During the Battle of Monte Cassino, Wojtek helped his unit to convey ammunition by carrying crates of artillery shells. This service at Monte Cassino earned him promotion to the rank of corporal and the official badge of the 22nd Company became a likeness of Wojtek holding a shell. Read more on thesoldierbear.com.

There are no reviews yet. 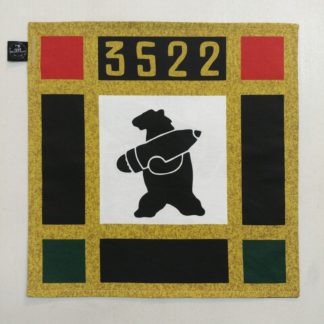